More than a million West Australians used a St John WA service in the past year, according to data published in the organisation’s 2017/18 Annual Report.

She said the results included achieving the majority of its ambulance response time targets and training more than 403,000 Western Australians in first aid.

“In the past year over one million people have come into contact with St John WA, either as a patient or a first aid student. Our 1578 staff and 8489 volunteers can be incredibly proud to have had such a profound impact on our community,” Mrs Fyfe said.

“Our integrated service delivers great value and service for the community of Western Australia and we are immensely proud of this fact." 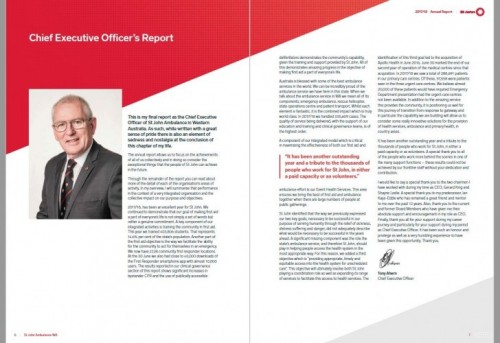 “Ambulance response times consistently met our targets in the metropolitan area as they did in the vast majority of our country career centres, ensuring life goes on for many,” she said.

“In the area of primary health and urgent care, which only became a part of St John in mid-2016, we saw 288,691 people in one of our GP or urgent care services,” Mrs Fyfe said.

“Our three Urgent Care Centres saw more than 57,000 patients, helping to ease the strain on busy emergency departments,” she said.

“This allows us to reinvest in the ambulance service and continue our charitable activities, such as free first aid programs for Western Australian school children.”

Major capital works programs completed in 2017/18 included construction of a new depot and training facility in Hedland, a new training centre in Fremantle and new facilities in Katanning, Northam and Augusta.

The annual report can be downloaded here.