Every day across Western Australia our clinical volunteers help save lives. They’re able to do this because they’re equipped with sophisticated clinical training equal to that undertaken by Emergency Medical Technicians in some overseas ambulance services.

St John Ambulance WA has released new information which shows its clinical volunteers – the lifeblood of the state’s Country Ambulance Service – receive the same level of training as professional, career paramedics in some overseas countries.

St John Country Ambulance Service General Manager Julian Smith said the organisation wanted to highlight the capacity of its clinical volunteers in order to grow a better understanding of how volunteers can and do save lives.

“It’s incorrect to assume that just because someone is a volunteer they’re less able to handle emergency situations and provide the highest level of patient care,” Mr Smith said.

“Every day across Western Australia our clinical volunteers help save lives. They’re able to do this because they’re equipped with sophisticated clinical training equal to that undertaken by Emergency Medical Technicians in some overseas ambulance services.

“When we speak to overseas paramedics about our volunteer workforce, they’re often blown away by the kind of skills that can be acquired by regular members of the community. This is fundamental to the success of St John’s integrated service model and a key reason why WA’s Country Ambulance Service is among the most effective and efficient emergency services in the world.” 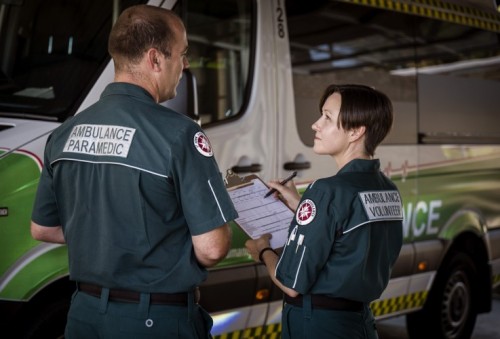 Despite facing many challenges unique to country areas, regional crews consistently responded to emergency calls faster than their counterparts in capital cities outside of Western Australia.

Regional crews – made up of clinical volunteers under the supervision of paramedics as well as volunteer/volunteer crews– also achieved survival rates for out-of-hospital cardiac arrest patients comparable to those in metropolitan Perth (8 per cent versus 10 per cent).

“Our regional crews are delivering a truly world-class ambulance service to all corners of Western Australia and that is reflected in data we have coming through,” Mr Smith said.

“The fact is we have a growing population, more emergency calls than ever, and yet the Country Ambulance Service, through the work of our country paramedics and clinical volunteers, is able to meet and continually exceed community expectations.”

Recently, two St John clinical volunteers based in South West put their training and skills to the ultimate test when responding to an emergency involving an elderly stroke patient. Using a new process that requires swift assessment prior to surgical intervention, the patient was able to make a full recovery.

“This particular situation is an example of how the training undertaken by clinical volunteers reflects best-practice treatment processes around the world,” Mr Smith said.