The Governor of Western Australia, Her Excellency the Honourable Kerry Sanderson AO, will today present Community Hero Awards to members of the public and St John Ambulance Western Australia volunteers and staff at Government House. 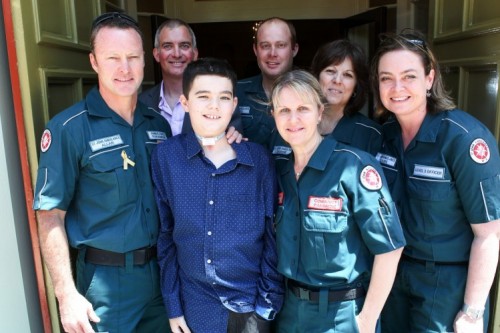 The Community Hero Awards are awarded to individuals who have displayed exceptional judgement and skill to deliver care to someone having a medical emergency.St John Chief Executive Officer Tony Ahern said each of the award winners had delivered outstanding first aid under extreme pressure.

“These people have demonstrated courage, skill and exceptional judgement in putting the needs of others first and they thoroughly deserve this recognition,” he said.

Mr Ahern said the awards highlighted why St John is committed to making a first aid a part of everyone’s life.

“The more people who are trained, the better the health outcomes – it is really that simple,” he said.

A panel of prominent West Australians from media and health fields helped select the award recipients.In addition to these awards, 30 National Medals were awarded to ambulance and communications personnel in recognition of their service.

Paid employees who have provided 15 years of unbroken service for St John were eligible for the National Medal, with clasps for every 10 years of service thereafter. The National Medal is a recognised award within the Australian Honours System.

Electrician Michael Barbarto was working in a roof space at a nursing home in Midland when he was electrocuted and went into cardiac arrest. Nearby colleague Joel showed exceptional judgement, turning off the power source, taking care not to touch Michael, and alerted colleague Dean. Dean and Joel started CPR, before being assisted by nursing home employee Hugh.

They continued until St John arrived. Paramedics were confronted with a challenging case. Paul, Shaun, Debbie, Alan, Tamarra and Troy used a ladder to access the roof space, which was dark and cramped. CPR continued and the team worked in the difficult conditions to administer important clinical interventions, including cannulation, intubation and the administration of medications.

There was considerable dust and debris to avoid, and paramedics had to position their feet to not fall through the roof. Fire fighters arrived and cut a hole in the roof to allow extrication of the patient, with the crews continuing to provide chest compressions and ventilation. All crew members, firefighters and bystanders worked well as a team in this dangerous and difficult situation so a life could be saved. Some sustained minor injuries and required treatment from fellow paramedics.

Michael left hospital, with the only injury being a missing finger where the electric shock entered his body. Needless to say, his mother is grateful for the work of everybody involved in his save and put them forward for nomination.

Eleven-year-old Lara Alban called triple zero when her mum Shauna was kicked in the face by a horse. She stated there was blood everywhere and her mum's face was dented. Lara calmly gave the address and details of what had happened.

Even though she was so scared, she took off her Taylor Swift shirt to cover and apply pressure to the wound. She calmed her mother, telling her help was on the way. She placed her mum in the recovery position and cleaned out her mouth when she started vomiting.

As the ambulance approached, Lara had a torch and she kept flashing it until the crew saw her. It was dark and cold and Lara remained brave through the ordeal. She found a horse's rug to cover herself to keep warm. Once paramedics arrived, Lara ended her call with the St John communications officer, passing on her father’s mobile number so he could be informed.

Lara continued to provide care for her mum on the trip into hospital where she again displayed great maturity to SMS her school to say she wouldn’t be in the next day and organise someone to feed the horses.

Ten-year-old Hamish Bolto was on his motorbike at his family's property in Katanning. Assuming a gate was open, he drove straight towards it. It was closed and barbed wire struck Hamish across the throat. His younger brothers ran inside and told his father Cameron, who went to Hamish and saw the horrific injury.

Initially responsive, Hamish fell into unconsciousness, so Cameron commenced mouth-to-mouth. Because Hamish’s trachea was severed, the mouth-to-mouth wasn’t delivering air to his lungs, so Cameron had to provide breaths through the hole in his neck. Thankfully, he woke up and an ambulance was on its way. First to arrive were Katanning volunteers Di, Claire and Chris.

Given the seriousness of the case, they called for community paramedic Sonia, who could assist with the airway injury. They got Hamish to the emergency department, where he was maintaining his own airway and responsive. He was signalling to Sonia whether he was comfortable or not, as she suctioned in and around the wound. Hamish needed to get to Perth, which would require sedation and insertion of a tube in his trachea. For this to happen, the rescue helicopter was required and it took off from Jandakot.

Sonia monitored and suctioned Hamish’s wound for an hour until the helicopter arrived. The entire time, Hamish was responsive and able to communicate using his eyes and hands. Critical care paramedic (helicopter) Allan sedated Hamish and he was intubated. Allan closely monitored him en route as his condition fluctuated. Hamish and Cameron were taken to Princess Margaret Hospital by St John metro crews. Hamish’s battle wasn’t over. An injury to his artery caused him to have a stroke 24 hours after landing in Perth.

His recovery amazed doctors and he went home to Katanning in August, travelling to Perth three days a week for rehabilitation. At any point, things could have gone bad. But the skills of the St John volunteers and staff who worked to save him were impeccable. Handovers from volunteer to community paramedic to critical care paramedic to metro ambulance were exceptional. The chain of survival was never broken.

Paul Hart was at work in the bakery and without any warning, he collapsed, on his own, with a cardiac arrest. They estimate he was without oxygen for five minutes, when he was found by colleagues, who without hesitation followed store emergency procedure. Triple zero was called and CPR was commenced by colleagues.

After about three minutes, Brett took over, delivering 12 continuous minutes of CPR. Paul survived that day and has no neurological deficit. His wife Sandra, who submitted the nomination, said: “Without the almost superhuman efforts to resuscitate Paul for such a long time, he wouldn't be with us today”.