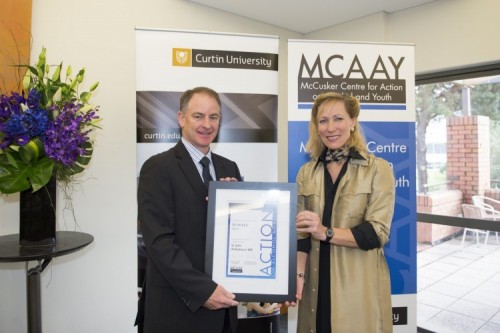 St John Ambulance WA has been awarded for its efforts to reduce the harm caused by alcohol among young West Australians.

The Action on Alcohol Awards were presented by the Honourable Malcolm McCusker AC CVO QC and Mrs Tonya McCusker during the fifth anniversary celebration of the McCusker Centre for Action on Alcohol and Youth at Curtin University this week.

St John won the award in the Community in Action – Organisation category for drawing public attention to the burden of alcohol harm on paramedics and ambulance service resources.

It highlighted this through a series of media reports, using ambulance callout data and personal accounts of patient’s affected by alcohol.

St John Deputy Chief Executive Officer Anthony Smith said: “We are pleased to be recognised for our commitment to improving the health outcomes of young Western Australians and thank the McCusker Centre for bringing attention to this important issue.

“Too often our paramedics and ambulance officers see young people making silly decisions while drinking, and the consequences can be horrific and life-changing.

“Educating young people on the dangers of alcohol is vital to reducing the impact it has on their health and society.”

McCusker Centre Education Officer Julia Strafford commended St John and other award winners on their efforts to prevent alcohol-related harm and violence in the community.

“It is important to recognise that so many people are doing tremendous work to reduce the harms cause by alcohol, and especially to make a difference for WA’s youth,” Ms Stafford said.

“As a community, we are recognising and taking positive action against excessive alcohol consumption.”