Members thanked for extraordinary contributions to their communities

St John Ambulance WA has recognised 57 members for exceptional service to the organisation at the annual Investiture of the Western Australian Commandery of the Order of St John.The Investiture was held on Saturday, 2 April 2016 at the Government House Ballroom in Perth and was conducted by the Dame Commander, Her Excellency Kerry Sanderson, Governor of Western Australia. 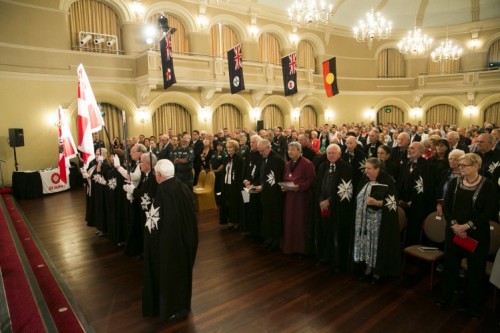 St John Ambulance Chairman Gerard King thanked all members for their significant contribution to the organisation and for their ongoing commitment to the service of humanity.

“This Investiture once again acknowledges the integrated model of service in WA that encapsulates volunteers and staff across metro and country, areas providing the very best in ambulance and first aid services,” Mr King said.

“Being admitted to, or promoted within, the Order of St John is a great honour and we are very proud of the volunteers or staff recognised this year, some which have dedicated more than 50 years of service in caring for their community.

“Occasions such as the Investiture bring attention to the remarkable volunteers and employees at the core of St John who help deliver a world-class ambulance service and help make first aid part of everyone’s lives.”