St John Ambulance WA is proud to support local footy ahead of this weekend’s historic finals, with two ambulances decked out in the colours and logos of the Fremantle Dockers and West Coast Eagles. 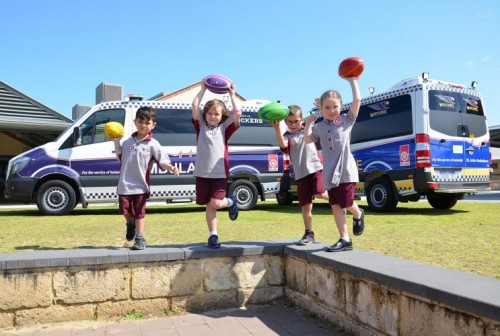 The vehicles will be used at events and to provide first aid training across Perth.

St John Chief Executive Tony Ahern said: “St John has a long history of supporting the WA community and these vehicles are our way to get in the spirit of the finals.

“We have a close association with WA football, providing player and spectator event health services at AFL matches for decades.”

St John reminds spectators to party sensibly over the next four weeks.

“It’s an exciting time for footy fans but we want supporters to look after themselves and their mates,” Mr Ahern said.

“After all, you don’t want to watch the Grand Final from a hospital bed.”

Mr Ahern reminds those amateur clubs heading into their own finals series to make sure they’re prepared for an emergency.

“The number of ambulance call-outs for sports-related injuries is significant this time of year and reinforces the need for coaches and anyone involved with a sporting team to complete first aid training,” Mr Ahern said.

“We’d also encourage all clubs to have well stocked first aid kits so they can respond when a situation arises. A lot of these sports injuries would require some sort of wound dressing or splinting so a kit is a must.”