Outstanding individuals and the state’s best ambulance sub centre were recognised at the St John Ambulance WA Volunteer of the Year Awards on Friday, 2 September.

Awards were presented at the Perth Convention and Exhibition Centre for:

St John Chief Executive Officer Tony Ahern said volunteers were vital in the provision of WA’s ambulance service and he said he was delighted to name Kevin Williams of the Capel-Boyanup Sub Centre, the St John Ambulance Volunteer of the Year for 2016.

“Kevin has been the driving force behind the project to develop the new Boyanup Sub Centre, applying his passion and knowledge to secure a grant through Royalties for Regions and sourcing nearly $60,000 of in-kind donations,” he said.

“In addition to his ambulance officer duties, Kevin has been a shining star through his significant support of future volunteer generations through ongoing engagement, and his hardworking ethic has made a significant impact to the sub centre and his community.”

“Thomas’ greatest achievement in the two and a half years he has been with Event Health Services is without a doubt his undertaking of the planning and execution of a large multi-agency exercise in August, the first of its kind involving EHS, alongside several emergency services crews,” Mr Ahern said.

“Thomas’ innovation and excellence in executing this plan has led to outstanding service, not only to his division and Event Health Services but also to St John and the wider community.”

The Country Ambulance Young Volunteer of the Year was awarded to Paul Munro of the Coolgardie Sub Centre.

“Paul is a dedicated, committed and valued volunteer with the Coolgardie and Kalgoorlie sub centres and has made an exceptional difference to the community through his roles as ambulance officer and Volunteer Development Officer,” Mr Ahern said.

“He demonstrates excellent leadership qualities which is evident in his delivery of training and his involvement as chair of the volunteer leadership group.”

“In her role of Community Attendant, Carla excels at providing empathy, leadership and support not only to her passengers but also to new volunteers who join Patient Transfer Community Services,” said Mr Ahern.

The Patient Transfer Community Services Volunteer of the Year was awarded to Julia Whiteley (of Connolly).

“Julie consistently provides a level of service over and above what is expected in her role as Community Attendant,” Mr Ahern said.

“One example of her excellence was a case involving a passenger she transported after a dental procedure. Due to the passenger’s limited physical capabilities after suffering a stroke in the past, Julie made a request to ensure he was settled at home afterwards. When his condition deteriorated, she advised the office that she was calling an ambulance for the care he required. Her care and compassion was paramount in the positive outcome for her passenger.”

Lorna Stewart (of Nedlands) was named the Event Health Services Volunteer of the Year.

“Through coaching and mentoring, Lorna has built the capacity of the Western Suburbs Division in her role of Divisional Manager,” Mr Ahern said.

“Under Lorna’s leadership, the Western Suburbs Division has built a strong base of volunteers, all of which are highly engaged active members of the organisation. Her limitless passion and enthusiasm for her people ensures her division has one of the highest volunteer retention rates.”

The Volunteer Education Volunteer of the Year was awarded to Andrew Diong (of Kensington).

“As a Volunteer Development Officer, Andrew has made a huge impact on the volunteers he teaches, ensuring they are operationally ready to volunteer in a competent and confident manner,” said Mr Ahern.

“Andrew’s energy, enthusiasm and positive attitude has meant that the first experience of a new volunteer is one which encompasses a true sense of what being a part of the St John family is all about.”

The Heritage Centre Volunteer of the Year was awarded to Irene Simpson (from Falcon).

“Irene has been a committed supporter of the St John Museum for 21 years and in addition to her role in research, filing, and guiding visitors, she is also the cornerstone of the St John heritage group,” said Mr Ahern.

“She believes in the power of teamwork, displaying both the ability to provide effective leadership and offering mentorship to others.”

Newman was named the state’s best ambulance sub centre for 2016. 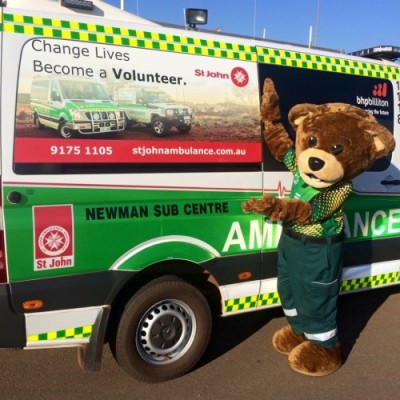 “The Newman Sub Centre has realised an increase of more than 20 per cent in volunteer numbers since 2014,” said Mr Ahern.

“This has been the result of an inclusive and engaged volunteer group and strong committee leadership and it has allowed the centre to grow and give back to the community.

“Some of Newman’s greatest achievements include the development of a remote indigenous first aid program which has been tailored to engage and suit the needs of the local Aboriginal community, as well as hosting Community 4WD Days to increase safety awareness and the employment of a casual kit servicing officer to continue to develop positive relationships and industry and community groups.”