The Public Transport Authority (PTA) has installed 18 defibrillators at metropolitan train stations, as part of a network-wide trial in partnership with St John WA.

The defibrillators are available 24 hours a day to the public and can be the difference between life and death in the event of a sudden cardiac arrest.

A further ten defibrillators have been installed in PTA transit officers’ mobile patrol vehicles, at a total investment of $50,000.

PTA spokesman David Hynes said the trial would better equip transit officers, members of the public and first responders in the event of a cardiac arrest.

“There are more than a million passenger boardings on the train network every week, so our staff are well-trained on how to deal with a medical emergency.

“Investing in these life-saving devices at our train stations and in our mobile patrol vehicles will enable our staff, other emergency responders and the public to deal with medical emergencies quickly and effectively.

“Every minute counts - the sooner someone can receive treatment from a defibrillator, the better their chance of survival.”

St John Clinical Services Director Dr Paul Bailey said cardiac arrest was a leading cause of death in WA and having access to a defibrillator would ensure people can get immediate help prior to an ambulance arriving.

“In the event of a sudden cardiac arrest, the first few minutes are vital,” Dr Bailey said.

“For every minute that a person is not defibrillated they lose a 10 per cent chance of survival and after 10 minutes the chances of recovery are virtually nil.

“The best thing about these devices is they can be operated by someone without any training – the machine provides simple instructions to the user,” Dr Bailey said.

In Australia 25,000 to 30,000 people a year die from a sudden cardiac arrest so we are pleased that the Public Transport Authority has undertaken this initiative,” Dr Bailey said.

The defibrillators are placed in locked boxes and can be accessed by calling triple zero and receiving an access pin.

The locations of the units appear on the St John First Responder app, which displays nearby defibrillators.

The results of the three-month-trial will be assessed to determine if a wider rollout is warranted. 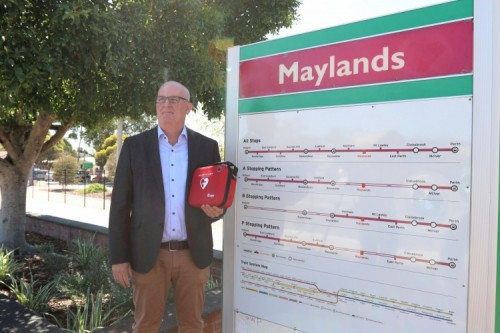