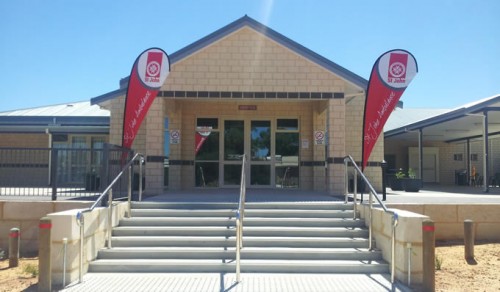 "This magnificent new facility will provide a hub for the St John ambulance service and for first aid training in the community," he said.

Mr Ahern said the new building would serve to support the contribution of volunteers in the local community.

"Volunteers are an extremely important part of St John and have been for more than 100 years," he said.

"We rely on the contributions of a vast number of people throughout WA, including 24 volunteers in Kalbarri and this new development has been largely realised through the hard work of the Kalbarri sub centre."

A four bay garage was built during stage one and training rooms, storerooms, office, kitchen/lounge for ambulance officers, bedrooms and toilets were added in stage two.

In 2012/13, Kalbarri ambulance officers responded to 182 call outs which was an increase of 21 per cent on the previous year. The new sub centre will allow St John Ambulance to improve operations and maintain response times with increased demand for services and projected future town growth.

Mr Ahern acknowledged the funding partners in the project.

"I’d like to thank the State Government for its financial support. The Royalties for Regions program contributed $900,000 and Lotterywest contributed $100,000," he said.

"The Kalbarri Sub Centre also invested $200,000 and credit goes to their chairperson Tom Newman and his committee for being the driving force behind this development."

Kalbarri Sub Centre project coordinator David Plenty said the tireless efforts of volunteers, both in serving the community and in raising funds, had resulted in a superb fit-out for the sub centre.

"Special thanks also to many community groups for their financial assistance and to the Shire of Northampton for their unfailing support throughout the project," he said.