West Australians are more likely than ever to survive cardiac arrest and have a good quality of life, according to the latest research.

According to the report, the first if its kind for St John, more bystanders are stepping in to help save lives, with double the number of people performing CPR than ten years prior.

In 2007, only 20 per cent of patients received chest compressions from a bystander; however this increased to 35 per cent in 2016.

“Without quick intervention, someone who suffers a cardiac arrest almost always dies,” he said.

“The Western Australian community plays a vital role in activating a number of steps to improve survival rates. 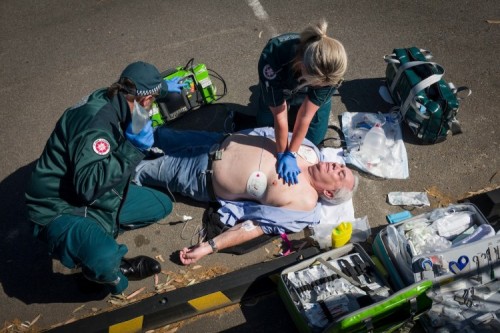 “The first step is bystanders being able to recognise that someone is in a cardiac arrest and calling 000 (triple zero) to get help.

“Secondly, a bystander can initiate resuscitation by performing CPR or (if available) using a defibrillator to shock the patient so as to return them to a normal heart rhythm.”

Dr Bailey said the time it took to get the defibrillator onto a person’s chest is key to improving survival rates.

“Our data shows that patients shocked by a public defibrillator survive at twice the rate of those shocked just a few minutes later by a St John clinical crew.

“St John’s cardiac arrest treatment protocols are developed in collaboration with medical specialists which ensures our officers are trained to deliver the highest level of patient care.

“When a public defibrillator is used, the percentage of patients being discharged from hospital following a cardiac arrest is 57 per cent, which provides powerful evidence as to the value of public defibrillators and their associated impact on survival outcomes.

“West Australian cardiac arrest patients are more likely than ever to survive, to be able to maintain their independence and have a good quality of life,” Dr Bailey said.

The report can be found here