St John Ambulance Western Australia has significantly bolstered its emergency response capabilities, with the deployment of its Mobile Command Centre at the 2014 Perth Royal Show.

The customised vehicle is fitted with the latest communication technology and will directly link the mobile command with the St John Ambulance State Operations Centre, Department of Health and other emergency services. 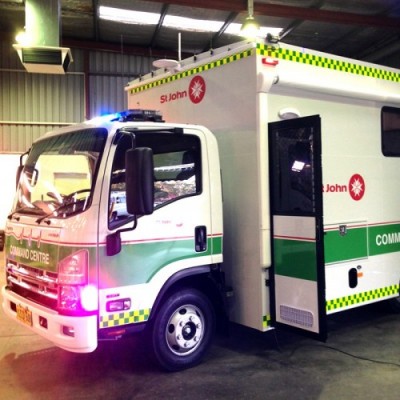 “WA is moving towards ensuring all emergency services vehicles are motorised to allow for quick evacuation if a situation escalates or changes rapidly,” Mr Martin said. “Ultimately, it’s about the safety of our members to be able to get them out of a danger zone – fast.”

“The move to a motorised Command Centre has also provided an opportunity to upgrade our command post communications equipment to improve contact with other services as well as our own teams on the ground.”

“The mobile command centre has the capacity for eight communications officers and includes features such as live tracking of our event ambulance fleet. The Mobile Command Centre upgrade is valued at $200,000.”

St John will dispatch the Mobile Command Centre for all major events in future, including the Australia Day Skyworks and major festivals and concerts, as well as large-scale emergency operations.

In addition to St John providing emergency and first aid care at this year’s Royal Show, commencing this Saturday, it is has an exhibit tent where show patrons can have a hands-on introduction to first aid.

“We will be running free CPR training demonstrations regularly throughout the day and will also have first aid kits on display, at specially discounted Show prices.”

The St John Ambulance Royal Show display is on Hardy Ave near the train station entrance; while St John first aid posts are situated around the showgrounds. Patrons should refer to their map for locations.

St John has been caring for the health of royal show patrons for 111 years in 2014.