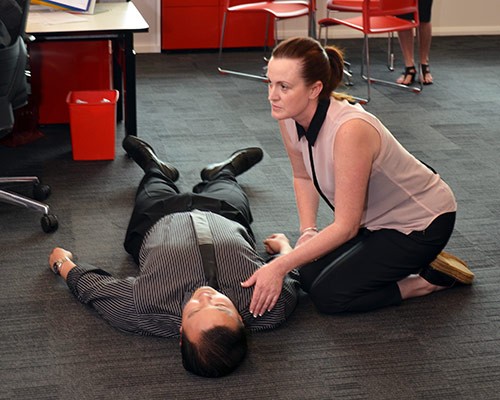 “It’s been really encouraging to see so many Western Australians respond to the first aid campaign we ran in 2014 and register to learn first aid or refresh their training,” Ms Mahon said.

“However, we are still a long way from our target of every person being able to apply basic first aid. In fact, our research indicates only one in four people feel they are confident enough to deliver first aid,” Ms Mahon said.

"Performing first aid in the minutes before an ambulance arrives can make the difference between life and death.It can also prevent more serious injury. For example, we know that irreversible brain damage begins if you go more than four minutes without oxygen.”

"And, as we head into the middle of summer, it is a time of year where St John responds to an increase in near drownings, dehydration cases and drug and alcohol-related incidents.

"Knowing what to do as a first responder, can make a significant difference to the outcome for the patient."

“Sadly 50 per cent of the emergency ambulance calls attended by our paramedics involve children under the age of 10. We can’t stress enough the need for children to be supervised at all times at the pool and the beach. Accidents happen, but if a bystander performs CPR it improves the chances of the patient’s survival," she said.

"St John also advises if you’re heading outdoors to apply sunscreen and a hat to limit the risk of sunburn and heat stroke, and also keep hydrated by drinking plenty of water. Dehydration, if it goes unchecked, can require paramedic assistance.”

Drug and alcohol cases also double for paramedics over summer; with about 75 per cent resulting in life-threatening emergencies.

Ms Wright said: “We’re not saying don’t drink at all; just use common sense. Space wine, beer or spirits with non-alcoholic drinks, and if you start to feel unwell or you’re losing control – stop drinking.”

In the case of any emergency, call triple zero (000) for ambulance assistance.

St John  has recently launched an easy, hands-on one day course designed to give participants a good grounding in first aid and covers basic life support skills. To find out more about first aid call 1300 ST JOHN or visit www.stjohnambulance.com.au