Beginning in February, the St John Early Childhood Program will engage with 15,000 students aged under eight in 2017. Students will be taught how to identify an emergency situation, assess potential danger and call triple zero (000) if required.

The free in-school program was officially launched at the City of Wanneroo Library on Thursday, January 19 at 10am where Dr Wood delivered a special reading of 000 Hero – a new book introducing children to St John Ambulance and the work of paramedics. 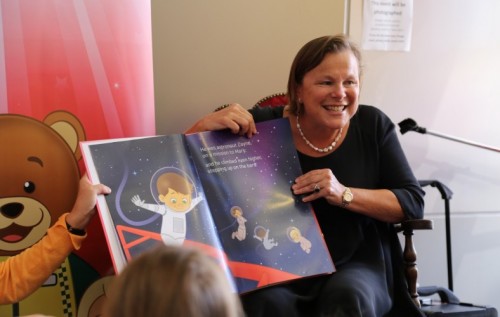 “At the most fundamental level, the Early Childhood Program is about engaging with young children and educating them about first aid so that they know what to do in an emergency,” Ms Smith said.

“The program is linked to the WA curriculum and is designed to engage at an age-appropriate level, while also promoting some important messages that will stay with children for life.

“We don’t ever want children to see an ambulance as something to be afraid of, which is why it’s important to introduce them to St John Ambulance at a young age and teach them about the work of paramedics.

“As children get older they’re likely to participate in more advanced St John Ambulance programs which build upon what they learn in the Early Childhood Program.”

Dr Wood, who is a mother of six and former Australian of the Year, said that while young children may not always be capable of administering first aid treatments, they could still save a life.

“There have been many instances where a child has helped someone after an accident or injury because they’ve been taught how to dial triple zero (000),” Dr Wood said.

“The Early Childhood Program is quite unique in that it engages with children at such an early age, but the skills taught are really valuable and most importantly for the kids, it looks like a lot of fun.”

The Early Childhood Program is delivered by a St John Ambulance Early Childhood Educator who will visit kindergarten and preschool classrooms to read 000 Hero and talk to students about the role of paramedics and ambulance vehicles.

Today’s launch at the City of Wanneroo Library will include giveaways, an ambulance display, and a visit from St John Ambulance’s mascot Kura.

For more information or to participate in the Early Childhood Program, email St John at youth@stjohnambulance.com.au or call (08) 9334 1310.