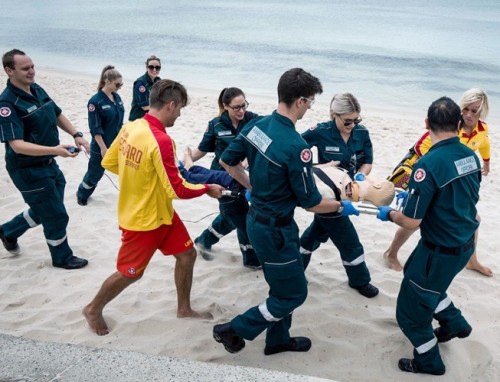 A group of 45 student ambulance officers and eight paramedics took part in the event’s six emergency scenarios, which included stabilising a casualty with a spinal injury after being dumped in the surf and resuscitating an unconscious swimmer using defibrillator equipment.

In the scenarios, lifesavers from Surf Life Saving WA (SLSWA) managed the patients before performing a “handover” to St John staff for treatment and transport to hospital.

St John paramedic training officer Dave Cutler said the joint exercise was an invaluable training experience for ambulance officers and it was a pleasure to work closely with SLSWA, which like St John, was an organisation that placed a high importance on the health of its community.

“This exercise helps everyone, it helps the beach staff to familiarise themselves with St John people, equipment and their procedures and likewise for us with SLSWA,” he said.

“That knowledge is extremely helpful when we’re involved in a real life emergency situation.”

The St John students are currently in their fifth week of an 11-week intensive full-time course. When that is completed they will start their on-road training, partnered with an ambulance paramedic.

Lifesavers launched the event by talking about their vital roles at the beach and emergency response procedures in place.

Beach inspectors shared details about devices used to carry out rescues, including floating rescue tubes to bring in unconscious swimmers from big surf and inflatable rescue boats (known as a rubber ducky) to perform multiple rescues in the water.