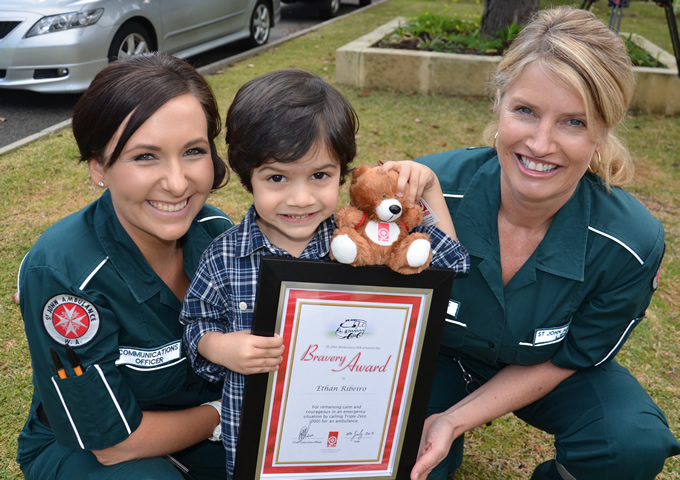 A Perth boy’s quick thinking has helped save his father’s life and prompted his parents to tell others they should teach their children about calling triple zero (000) during an emergency.

Four-year-old Ethan was enjoying a night in with his dad Noel – the two of them sat cosily on the couch watching television when a medical emergency arose.

Noel was having a seizure and help was needed. Despite the sight of his dad on the floor and bleeding from the mouth, Ethan, who was home alone with his dad, dialled triple zero for an ambulance.

The St John Ambulance communications officer who took the call was initially surprised by the young voice on the end of the line but guided Ethan through the next gruelling 15 minutes until the ambulance arrived.

Ethan calmly told the communications officer what had happened to his dad, where he lived and took instructions on how he can look after his dad until the ambulance arrived at the family’s Cottesloe home.

Mother Rainda said Ethan’s actions did not surprise her. She had taught him about dialling triple zero a year before.

"I was at work so he just went to the home phone, dialled triple zero and begun explaining what had happened," she said.

"He then went to his dad’s mobile phone, looked me up on his favourites to tell me what was going on."

"He did it very well. I would strongly recommend other parents teach their children about dialling triple zero when there is an emergency."

She said Ethan had since gone on to give a presentation to his pre-school classmates about the triple zero call.