Defib donation to save lives in Lucky Bay

Defib donation to save lives in Lucky Bay

“For every minute following a cardiac arrest, the chance of survival decreases by 10 per cent but having a defibrillator will buy time.”

Esperance residents Heather and Kevin James have been thanked by St John Ambulance WA for their generosity after they donated a defibrillator to Lucky Bay. They said they decidd to make the donation after a visit to the remote location, approximately 60 kilometres southeast of Esperance.

Heather's friend is a St John Ambulance first aid trainer and she told her that they were very excited because there were more than 50 defibrillators being distributed in town.

“We went out to Lucky Bay in October last year and knew there wasn’t one there so we talked to someone at St John Ambulance and they got the ball rolling,” said Heather. 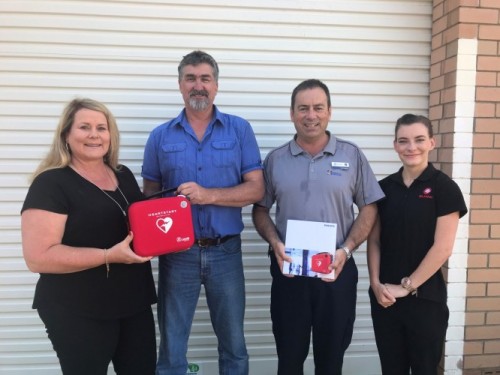 St John Ambulance Community First Responder manager Sally Simmonds said the coastline of Western Australia can be very isolated and a long way from immediate medical assistance so this donation would make a big difference.

“For every minute following a cardiac arrest, the chance of survival decreases by 10 per cent but having a defibrillator will help to buy time.”