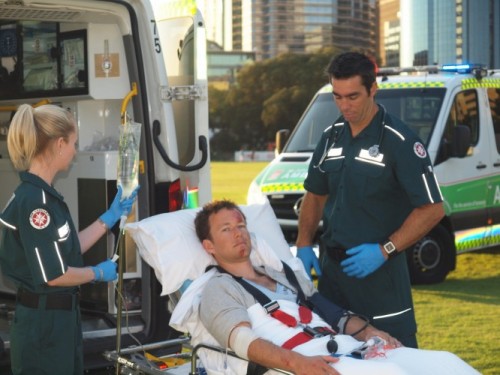 St John Ambulance Western Australia is urging people to apply moderation this Christmas and New Year – whether you are going out to celebrate or planning festivities at home.

Alcohol and other drugs cases double for paramedics over summer, and December is the busiest month of the season, with St John Ambulance responding to more than 760 ambulance calls last December alone.

“Alcohol intoxication alone accounted for nearly half of these types of cases last summer, with smaller percentages for incidents involving over-the-counter, prescription and illicit drugs – or a combination,” said Ms Wright.

“These incidents put extreme pressure on our resources, especially in December when people take time off over Christmas and New Year and tend to allow themselves to overindulge as they let their hair down,”

Ms Wright said St John is appealing for people to use their common sense.

“We’re not saying don’t drink at all but space the wine, beer or spirits with non-alcoholic drinks, and if you start to feel unwell or like you’re losing control – stop drinking.

“When you’re intoxicated, you can lose self-control and put your personal safety at risk, or endanger others celebrating the festive season with you. Our paramedics routinely respond to an increased number of domestic traumas over major holidays, which include assaults, injuries and falls.”

“Most worrying is that young people don’t seem to be learning from experience, with paramedics attending more 29 year olds than 18 year olds last summer. So we’re hoping this year, people will take our advice and approach the festive season with moderation.

Ms Wright also noted these figures do not include serious injuries such as fractures sustained from alcohol-fuelled incidents, including motor vehicle accidents which can also impact people.

In addition, St John also advises caution if you are heading outdoors over the festive season, when temperatures can soar into the high 30Cs.

“As well as wearing sunscreen and a hat to limit the risk of sunburn and heat stroke, keep hydrated by drinking plenty of water. Dehydration, if it goes unchecked, can require paramedic assistance.”

“Drowning is also a serious risk at this time of year. Half of the near drowning cases attended by our paramedics last summer, involved children under the age of 10. Children must be supervised at all times whether you’re at the pool or the beach.

And in the case of an emergency, Ms Wright advised, even on Christmas Day, to call triple zero (000).

“As always the St John State Operations Centre and Ambulance service are on duty 24/7, even over the holiday season so all triple zero calls will receive assistance.”