St John Ambulance Western Australia has promised more than an unforgettable experience at this year’s Perth Royal Show, but something you’ll remember if faced with a life-threatening emergency. 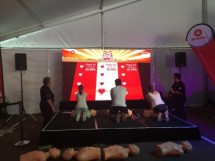 Featuring the latest in locally-designed digital technology, the ‘First Aid Frenzy’ exhibition will be launched by St John when gates open at Claremont Showgrounds this Saturday.

“We want show-goers to head home this year with more than a show bag or two, by giving them an introduction to first aid training or refreshing their skills so they can save someone’s life if they are ever called on,” said Mr Martin.

“When you’re competing for attention against show rides, animal exhibits and delicious food displays, we had to come up with an experience that wasn’t only informative – but fun and engaging too.”

First Aid Frenzy will feature a broad range of activities to suit different age groups, with CPR Hero – a WA first – expected to be the highlight of the exhibition.

Mr Martin said: “CPR Hero is inspired by similar video games, but rather than a gaming console, three players will perform compressions on a Resusci Anne manikin to simulate CPR.”

“Each manikin will be connected to the device with players challenged to keep their chest thrusts in time with the corresponding beat on the screen. The goal is to keep your patient alive, which they do by learning the correct timing and depth of chest compressions. Each player will get a score to see how close they are to becoming a CPR Hero.”

“The digital animation is projected onto a white manikin and screen depicting various emergency scenarios. So for example, you’ll be shown what happens to your body when – say – you’re bitten by a snake and the impact of first aid on treating the wound.”

Visitors to First Aid Frenzy will also be able to try their hand at bandaging, walk through an ambulance, meet a paramedic and even take home a Hero ID card to show they know when to call triple zero (000).

In an exclusive offer, anyone who participates in a St John first aid activity zone at the Royal Show will receive a certificate of participation and 15 per cent off first aid courses.