When the university school year starts up again at the end of February, two students in particular will be thrilled to kick off their studies.

Liam Ryder and Jeremy Maitland-Smith are the successful recipients of St John Ambulance WA’s Aboriginal student ambulance officer scholarship, which supports them in fulfilling their dreams of becoming a paramedic.

Funded by the state government’s Royalties for Regions program, the scholarship is open to Aboriginal people in the Kimberley, Pilbara, Midwest and Goldfields regions. 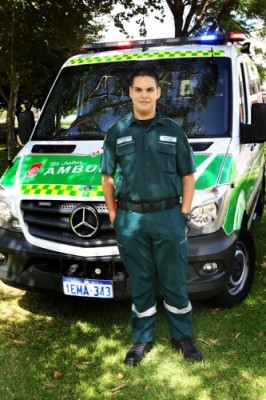 ith volunteered as ambulance officers with St John in their home towns of Carnarvon and Wyndham, respectively, for several years before applying for the scholarship, and they expressed their surprise and gratitude at being accepted.

“It’s a great way to become part of the community and to help people in need,” said Mr Maitland-Smith.

“I really wanted to give it a go and help people and also learn new skills,” added Mr Ryder.

St John Country Ambulance Operations Manager Justin Fonte said: “We are pleased to offer this scholarship and thank the state government for choosing St John to deliver this opportunity.”

“Liam and Jeremy are outstanding individuals who have already displayed a willingness to serve the community, a trait that St John values immensely,” Mr Fonte said.

“The scholarship is an important component of our Aboriginal Ambulance Service Project, which is striving to build community engagement, increase first aid skills, and improve resilience in Aboriginal communities across WA.

“Being able to provide a culturally sensitive ambulance service and encouraging more Aboriginal people to take up first aid training is the backbone of the project.”

At the end of the fourth year, the successful applicant will be a qualified, experienced paramedic employed by St John and able to work at numerous sub centres across the state.